A walk or rather a drive down Magical Mystical Ancient country of ' The Hasemite Kingdom of Jordan' ruled over centuries by regional as well as Roman kingdoms.
Amman is the capital of Jordan. The country is so small that within two days I met a young man who is the teacher to King Abdullah and Queen Rania's children and another lady who works in the King's administration.

Overlooking the verdant valleys with our Bedouin driver's Mercedez - 30 years old with 300000 Kms on it. We had 6 hrs in Jordan in the first leg and unsure of visa rules for returning within 10 days for 2nd leg so this was truly an adventure with continuous considerations of possibility of having to stay here forever.
Face-off with the Bedouin. Bedouin are some of the few remaining desert nomads mostly known to western audience due to British officer 'Lawrence of Arabia'.
Hadrian's gate in Jerash. To draw comparison, this was built even before the time of Chandragupta-I right around 2nd century A.D. Architecture lovers will have a field day. This is one of several triumphant arches/gates built in memory of memorable victories or guests during 2nd century. This was a full-fledged functioning city of 30000 inhabitants so such nooks and corners with tunnels is not a surprise. It just depends on what got preserved and what was destroyed. 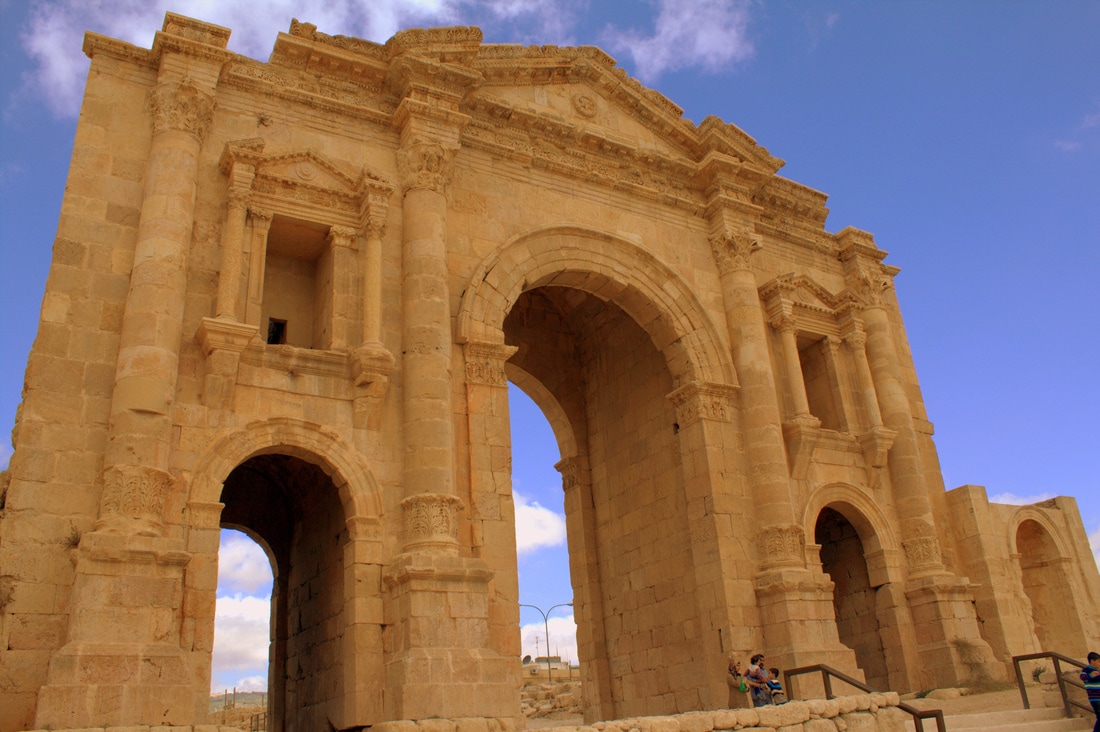 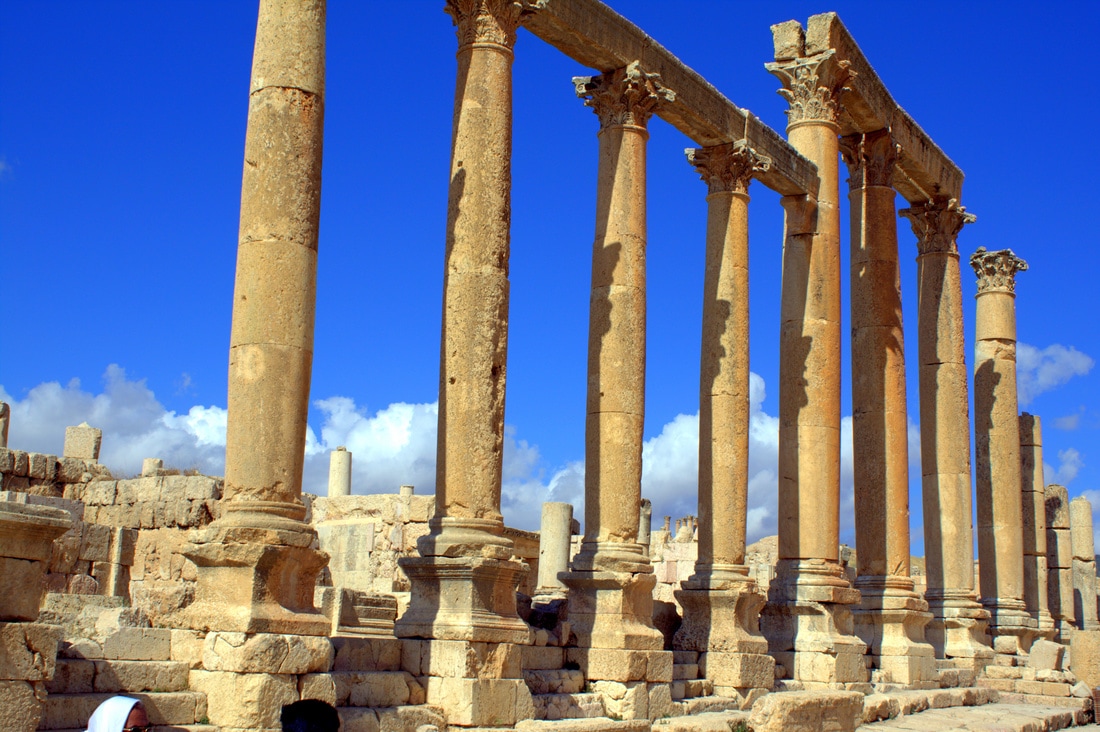 The Forum. Center of commerce and activity in the heyday.  This is the classic view of The Forum with the living quarters in the background. Forum is where most informal social and cultural interactions would take place in ancient Roman cities. 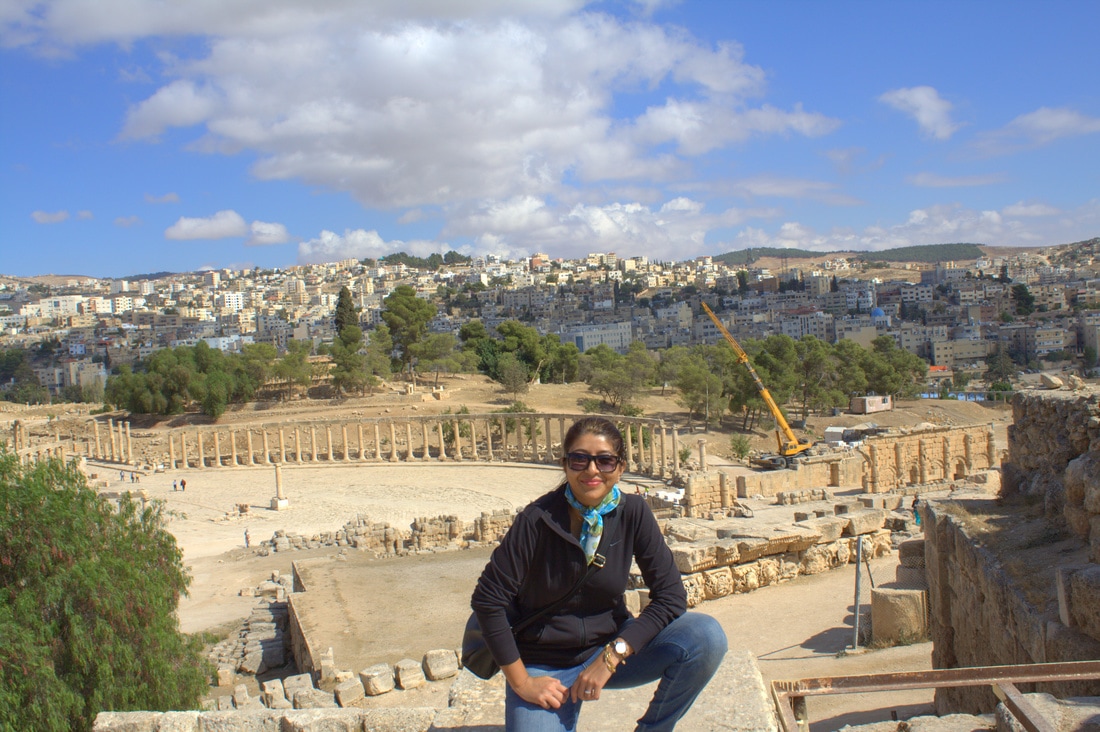 ​This very spot was ruled by Egyptians and named Philadelphia, then by Romans 2000 years ago followed by Umayyads and then part of the sprawling Byzantine empire. For a history buff, just skimming from one century to another will take 4 hrs right away 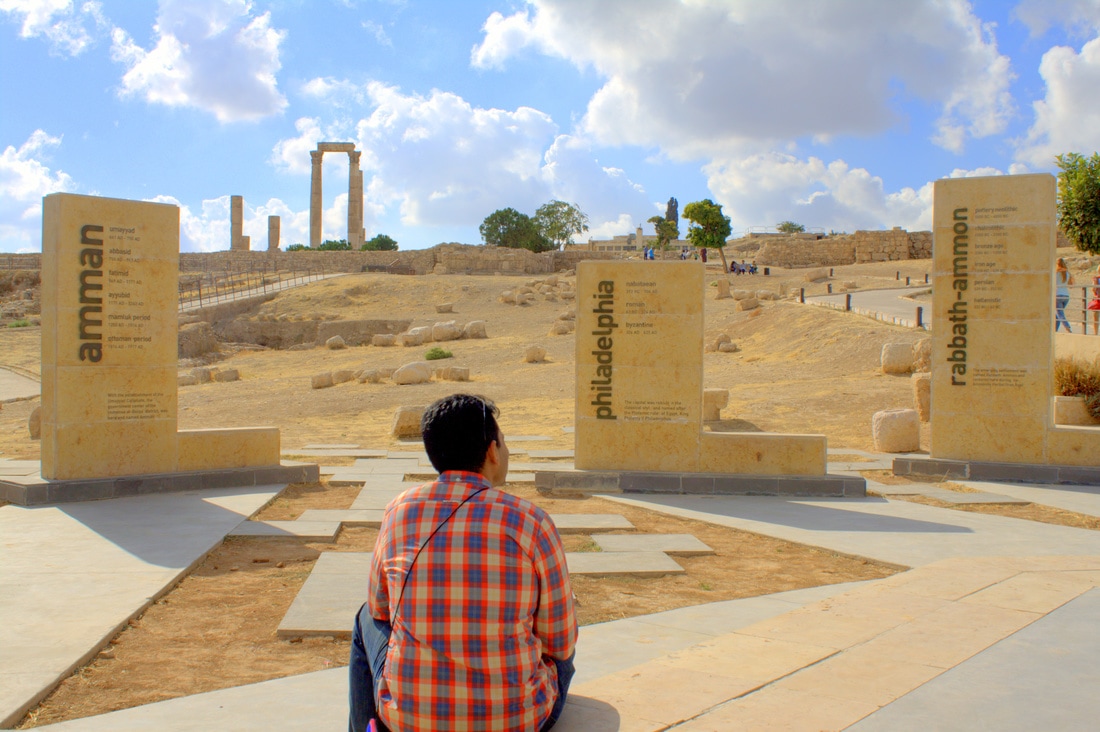 Imagine sitting carelessly on a balmy evening at this citadel site (850 mts above sea level) listening to the most soothing recitation of Azaan knowing someone walked on this hill 10500 years ago. 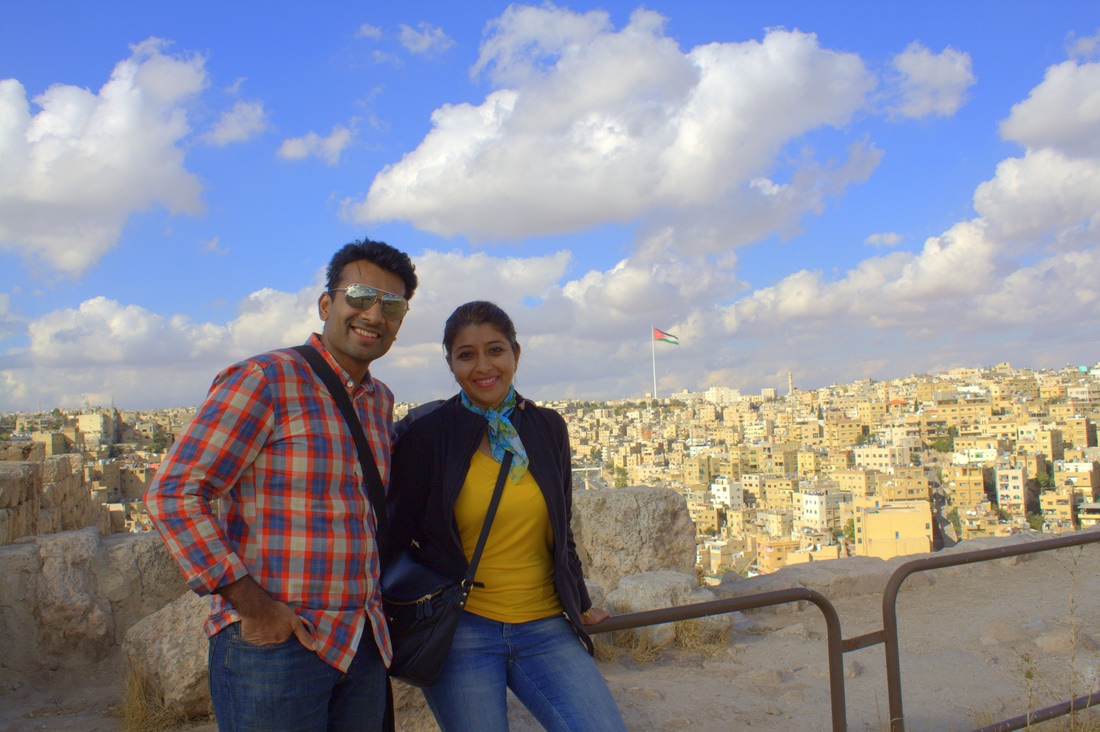 There is a larger Roman amphitheater ruin right in the middle of a bustling modern city of Amman. Do you know that this city has been continuously inhabited since 1800 BC? 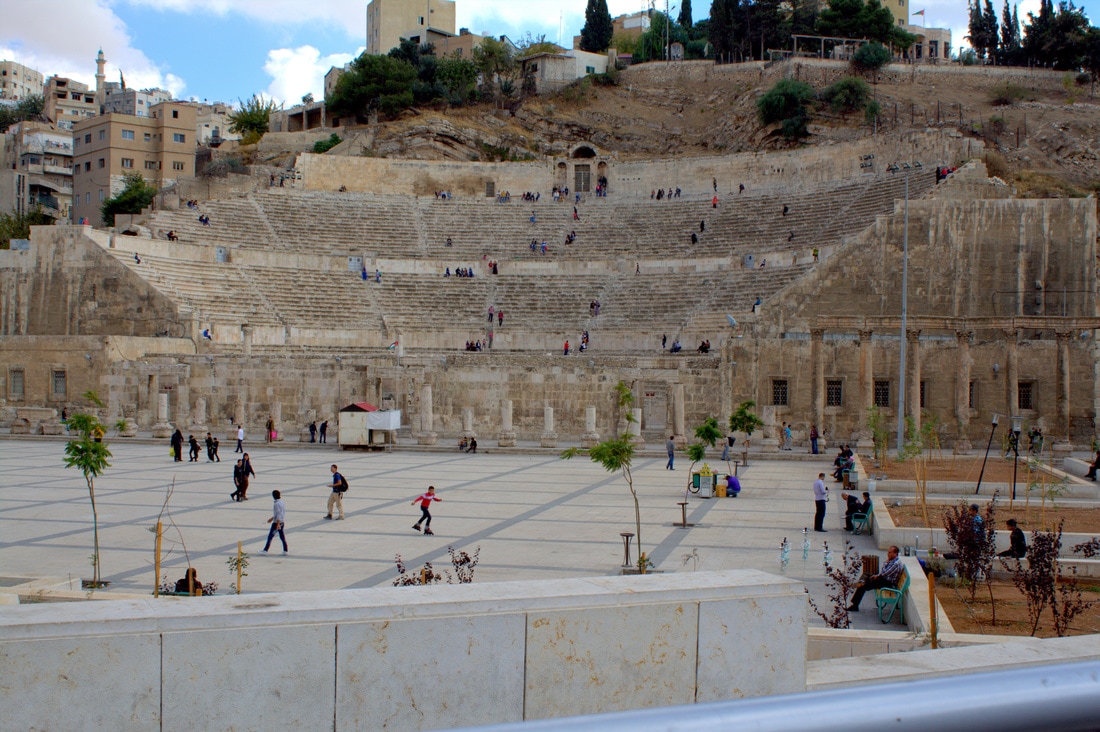 Although the extended region is dry desert, Jerash and surroundings earned its fame due to its fertile soil. Such orchards inundate the region. 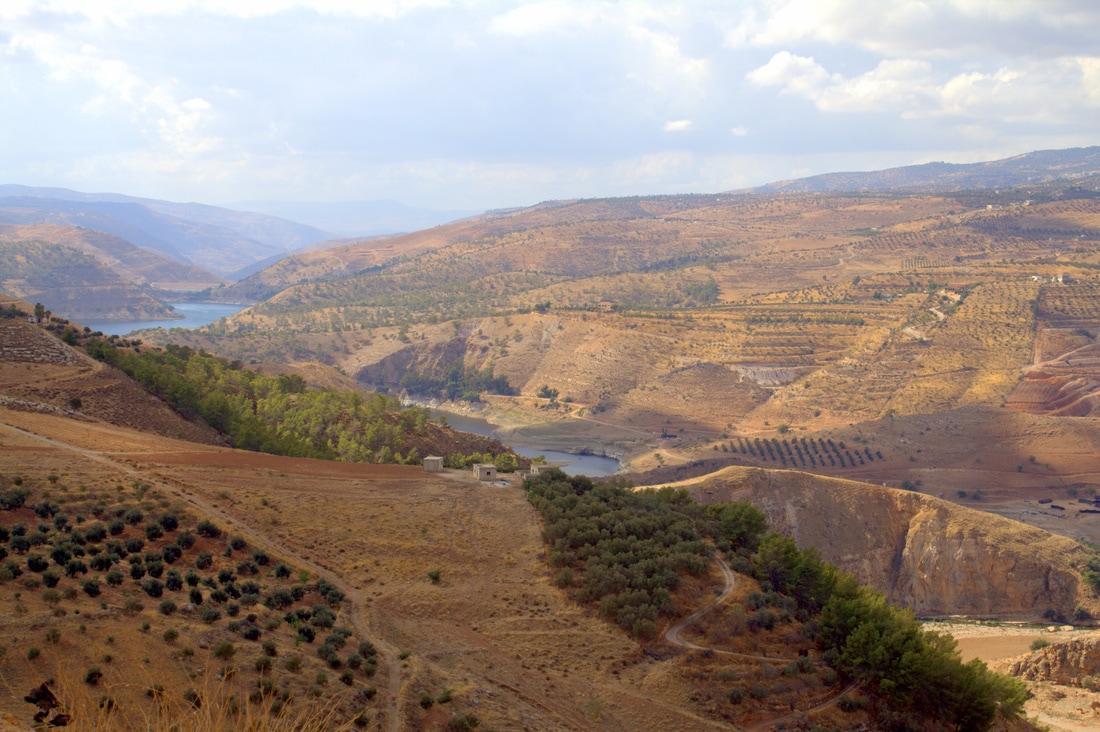